By Ricky Gervais and Rob Steen 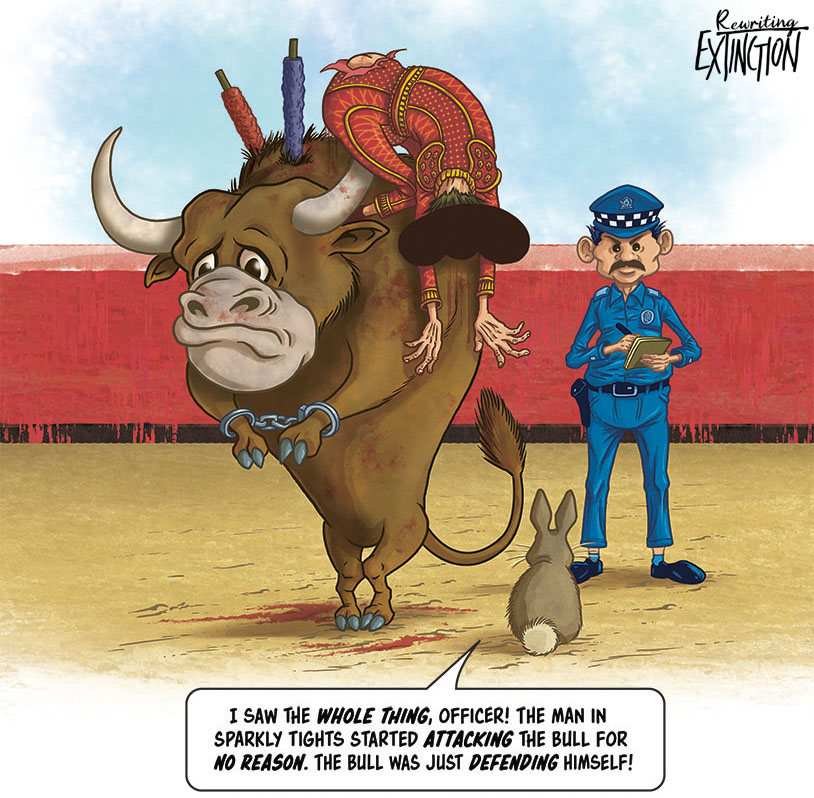 Victim blaming at its worst

“A beautiful animal, literally tortured to death as entertainment. Psychotic. Fuck anyone who enjoys or defends it.” Ricky Gervais, writer of Bullfight

In any place, in any walk of life, if you were to tell this tale, we’d all say the same – self defence. But with animals, they have no defence. If an animal defends itself against human, it’s usually imprisoned and then killed.

Human perception towards animal cruelty is changing faster than it ever has, but it’s not fast enough. Millions of creatures are still routinely tortured for food, medicine or even worse, fun – often under the umbrella of ‘tradition.’ “It’s been a part of culture for generations” people bleat… well so was slavery and female subjugation.”

It’s not enough to lazily use tradition as an excuse for cruelty. We have to shout loudly and clearly, that we will not live in a world that kills animals for fun.

Thank you to Rob and Ricky for making this comic and raising awareness of this deplorable act of cruelty.

How you can help

We’re devoting the next 12 months of our lives to raising the money and awareness we need to stop species going extinct, and to put them back into recovery.

Our project brings together the best projects and thinking from 7 charities and a whole slew of experts from across the planet. Let this be the moment we say “NO MORE EXTINCTION” and start rebuilding their world, for all our benefits.

Please do consider donating and sharing our message to create a global voice of positivity and action. Thank you xx